This year there is supposedly suspense – Best Picture between Birdman and Boyhood; Best Actor between Michael Keaton and Eddie Redmayne.

But there is no suspense when you do the picking yourself.  Welcome to my picks for who I would vote for if I had an Oscar ballot. This is not who WILL win. This is who SHOULD win. Oscar voters are notorious for voting with their heart – for their favorite actors, to reward past performance, and to vote against films and filmmakers. I’m no better.

And unlike many Oscar voters, I’ve seen all the nominees in the Top 8 categories.

Picture – Selma – Although I picked The Grand Budapest Hotel as my favorite film of the year, Selma is a better choice for the “Oscar.” Yes, I’m a sucker for the pomp and circumstance of Oscar, the “importance” of it. If I wasn’t, I wouldn’t write a blog post about it.

Director – Has to go to Richard Linklater for the sheer audacity of Boyhood.

Actor  – Eddie Redmayne had me forget he was performing.  None of the others did. That’s my pick.

Actress – Julianne Moore. But some of that is to make up for past losses. She’s always amazing.

Supporting Actor – Edward Norton can do only right in my book. That too is making up for past losses. But if they give it to JK Simmons (as they will), I’m fine with that. 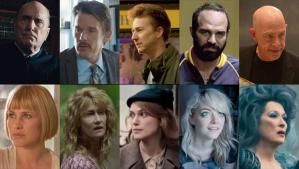 Supporting Actress – Patricia Arquette. For a fine 12 year performance. “What?” you say. “Why not Ethan Hawke then too?” ‘Cause I can’t stand Ethan Hawke.

Adapted Screenplay – Whiplash by Damien Chazelle. Better story than the others. Plus he is a newbie and that’s fun to fill the rest of his life with expectation as “Oscar Winner.”

Animated Feature – So I haven’t seen Boxtrolls. But of the other 4, I liked Big Hero 6 the most. Song of the Sea is well worth your time.

Again these are who I would vote for to win. Not who will win.

Who do you WANT to win at the Oscars?