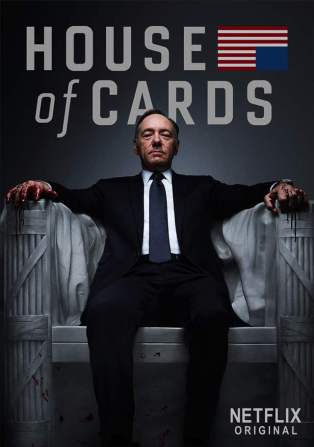 I finished watching Netflix’s House of Cards last week. While I saw all 13 episodes in a relatively brief time, I did not have the same intensity as with other marathon TV watching (ex. early seasons of Breaking Bad, Mad Men, Homeland, Parks and Recreation). I did not binge.

The main reason? I just didn’t really like almost any of the characters.

The men are byproducts of their vices and power. There is little self-control or morality at play.

The women ultimately are objects of desire who use sex to further their ends (with some exceptions).

The show is wonderfully acted with great production values, surpassing twists, and great suspense and surprise. But that’s only enough to make it good.

While there are an endless number of characters to remember, the main characters all are unpleasant at times and not particularly sympathetic. Kevin Spacey, as the so-bad-he’s-good, is no Walter White. He is too privileged, too powerful, and too mean to really care about. Robin Wright lacks emotions in her role. Kate Mara’s character makes unpleasant choices and she seems so juvenile, it is hard to take her too seriously. Corey Stoll has had periods of great appeal, but then pursues such unsavory and horrible choices that he becomes repellant. Michael Kelly, perhaps because he is mostly an enigma, has somehow remained one of the few amiable characters. 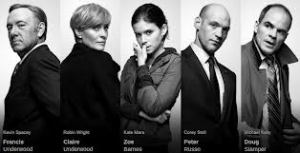 Now it is true that show also has some pretty ludicrous plot moments. But so does Homeland. Those characters are compelling and despite their many flaws I find them appealing enough to let me look past it. Well, except Dana. She is the worst. On House of Cards, I just don’t care enough about the characters because despite their many flaws, in my heart I don’t really like them that much.

In the small complaint department, the theme song played over the opening credits is dull (It’s no West Wing theme, which won an Emmy). And the cliffhanger (no spoiler) is not much of a “cliffhanger”.

So if you love The West Wing or Political Animals, as I do, you will probably like House of Cards, but I bet you won’t love it.

2 comments on “House of Cards”