The Red Carpet for Real

After 7 hours, it was finally happening. While people had been walking down the carpet clearly dressed for the Academy Awards for a long time, we now had a collection of known quantities around the Carpet ready for action. (Al Roker, Kristen Chenoweth, Robin Roberts, Kelly Rowland, Michael Strahan, etc.) Never saw Ryan Seacrest though – he was much closer to the beginning of the carpet.

The first “famous” (non-“reporter”) people were the Ballot Box guys walking their precious cargo with great determination. And then doing it again for a better camera shot.

Then we had a series of interviews with nominees…but not the ones we wanted. Still, it was nice to hear from Benh Zeitlin, director of Beasts of the Southern Wild, who looks like he is 20, Michael Dana, composer of Life of Pi, Rich Moore, director of Wreck-It-Ralph, and…okay, I wasn’t that interested either. The banter was basic and we wanted the A-Game.

And then superstars of Hollywood were upon us.

The crowd around us was no use in knowing who was coming. The bleachers to our left saw everyone first, but that didn’t mean that person made it down by us anytime soon. Jennifer Lawrence was spotted in beautiful, giant white not-a-wedding-dress early on, but then we didn’t see her.

Reese Witherspoon was the first major A-Lister to come by, wave, smile. Then came Zoe Saldana, Daniel Radcliffe, Eddie Redmayne, and an actual A-Level Nominee – Amy Adams. Rather than clutter this with name-dropping, I’ll devote tomorrow’s post to a fuller recounting of who we saw and to more photos.

There are 3 lanes on the Red Carpet. Closest to us could be called “Coach”. This is a wider section, and a slightly different color, for most people walking the carpet. Typically, anyone attending the show, most Academy members, and the nominees you’ve never heard of walk this lane. However, that doesn’t mean A-Listers don’t walk this lane. For whatever reasons, Tim Burton & Helena Bonham-Carter walked with a group ignoring the crowd until the bleachers shouted loud enough to get him to look up and offer a quixotic smile. Quentin Tarantino hugged the side, but his causal appearance and height made it impossible for him to get by without everyone noticing. This lane is a way to avoid press.

The far lane, nearest the press, is “Business Class”. Almost all the A-Listers walk here. They will find an endless stream of cameras and microphones. Some interviews seemed clearly planned and organized. Others were corralled. We noted Jennifer Lawrence chatting with Al Roker for a LONG time. Among the famous celebrities and their families were also many others. But who they are was a mystery. They didn’t seem connected to any celebrity, but walked or strolled or otherwise down the lane anyway.

The final section is “First Class.” This is the middle lane of the carpet set off by velvet ropes on each side. This is really the fast track. When a celebrity is needed at the other end of the carpet – for an ABC interview or otherwise – Oscar staff race him or her down to the other end. We only saw the biggest of the big go this way.

The photo below will give you a sense of the mayhem as well as the 3 lanes. Now for the fun part: What celebrities do you see in the photo? I only see 2 A-Listers. Put your answers in the comments and the first person to find the same 2 as me will get a prize. (Click on it for a larger version!) 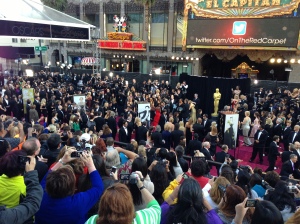 Celebrities came and went. People would shout names, but it wasn’t easy to pick them out of the sea of people. Someone shouted “Dustin!” and that prompted a teenage girl near me to start screaming, “Justin! Justin Bieber is here?!” It was, of course, Dustin Hoffman.

Channing Tatum raced by us with a wave (left). Then he strolled back from the main ABC area down the carpet with his pregnant wife (right).

Some celebrities seemed to go down the red carpet multiple times. Others took their time. Chris Tucker, who hasn’t made a movie called anything other than Rush Hour in 15 years, took advantage of being in a decent film and was on the Red Carpet seemingly longer than anyone else we observed. And Jennifer Lawrence did finally make it us near the end of the Red Carpet time. We discovered the things were starting to wrap up when Kristen Chenoweth finished her ABC coverage and raced down the red carpet in her Uggs.

At the very end we got out final celebrities – all of whom were much anticipated. As the carpet emptied out, the producers of Argo arrived in our area, which meant Ben Affleck and George Clooney (see photos above). Both looked great. Clooney looked much more relaxed. Jennifer Garner had walked the carpet alone earlier, but Stacy Keibler was joined in arms with George. George then decided to share to the world that “Ben Affleck is an alcoholic.” He also noted he wasn’t in a hurry.

As if having Clooney there wasn’t enough wattage, racing down the line right then was Hugh Jackman. He stopped to be interviewed and was his usually fan friendly, upbeat self. He remarked being nominated was “less stressful than hosting.”

As Clooney, Affleck, Grant Heslov, and Harvey Weinstein headed off into the Dolby, the staff of the Fan Experience quickly ushered us down the stairs. We were led back to Highland Avenue, but then passed in front of the entrance of the Red Carpet (“No photos!” they shouted – after I took the one on the left) and onto the other side of the street. Wlking behind the quickly emptying set-ups where the camera crews had been, we could see our bleachers from the opposite side. (“No photos!” they shouted – but then realized we have been taking photos all day and said we could go ahead)

The El Capitan Theater was our new home. This is the refurbished Disney theater where many of their premieres are held and they are always showing old Disney classic with floor shows and more. It is a beautiful theater of a grand old style. As we entered, the Oscars were already on the huge screen with Kristen Chenoweth’s pre-show wrapping up (she taken off the Uggs we also noted).

[Note: The Academy Awards are on ABC, a Disney property, as is the El Capitan Theater]

Dinner was available buffet style and because my bleacher section was the first one in, I was in my seats with a full plate of food on my lap before Seth Macfarlane had offered his first insult. Watching the show on the big screen was a lot of fun and the perfect way to end a “big” day.

The Academy Award fan experience is fantastic. In every aspect, the Academy had us well taken care of and organized. I didn’t see a single meaningful glitch. They had tons of staff who were friendly and knowledgeable. They provided us good food and beverages and lots of little extras. While we had to be there a LONG time, we were well taken care of and the pay off was a reasonably close experience with the major celebrities in Hollywood. The Academy wants us there to have joyous fans in the background, but they made it worth our extra time.

If you can find a way to join the bleachers, I highly recommend it as a fantastic experience.

Tomorrow: More on the Celebrities We Saw (and Didn’t See)