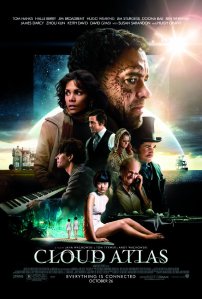 I know you’re strapped for time. So watching movies comes at premium. And I have the solution for you. If you have 3 hours or so, you can see:

Cloud Atlas is a film that probably benefits from multiple watchings, not to mention frequents readings of the acclaimed book. It intersperses seven different timelines (the 7th is a prologue/epilogue for story telling needs). Do not go in to trying to understand the actual film. It jumps regularly between the time periods and has so many characters that the best choice is just to let it wash over you.

When you do, this movie by the directors of The Matrix (Andy Wachowski and Lana Wachowski) and Run Lola Run (Tom Tykwer) paints a powerful canvas of reincarnation, making our mistakes again, being influenced by the past, working towards the future, and being a better person. At 172 minutes, it also does it over and over and over. But I wasn’t actually bored or checking my watch as I knew what to expect.

One of the reasons the film succeeds is the directors, a rare case of 3 directors working together, and screenwriters wrote David Mitchell’s novel as a movie, not a book adaptation. In the book the 6 stories are told chronologically cutting off half-way through and then moving onto the next. After the 6th story s told in totality, it regresses in time through each tale ending back at the second half of the first story. The movie jumps from story to story for only a moment or for a long scene. This keeps it lively, if not also confusing.

The second major change they made was to use the same actors in every story line. Tom Hanks, Halle Berry, Hugo Weaving, Jim Sturgress, and Hugh Grant play characters – some major, some minor – in every story line. Jim Broadbent, Doona Bae, Ben Whishaw, James D’Arcy, Keith David, and Susan Sarandon, among others, play multiple major roles.

The characters do not appear to be reincarnations by the actor across the nearly 400 years of story. For example, while Weaving essentially plays a bad guy in every story line, Hanks supposedly plays the everyman – a naïve scientist in 1973 and a primitive shepherd in 2321. Except he doesn’t in 1849 when he plays a greedy doctor and in 2012 when he plays a thuggish mobster. The reincarnation element is hinted at by a comet birthmark that shows up very occasionally and became more of a distraction than a clue on it’s often brief appearances. (I’ve read it plays a more notable role in the novel) CInema Blends offers an excellent chart on the karmic journey of the characters of each actor at http://www.cinemablend.com/new/Cloud-Atlas-Infographic-Explains-Karmic-Journeys-Movie-Characters-33823.html

The innovative casting went beyond accents and the roles. The make-up is impressive even if it isn’t always convincing. Some of the game is simply recognizing an actor in their new part. This is more interesting because roles were assigned regardless of age, ethnicity, race, or gender. Halle Berry does a fine job as a 1930s Jewish woman (see above center). Doona Bae becomes a less convincing freckled British woman. Hugh Grant is particularly impressive as a tribal warrior. And Hugo Weaving, as always, can plan any type of villain anywhere, but his amusing turn as Nurse Noakes practically stole the movie. While the multiple non-Asians playing “yellow face” was distrcting (and some found outright offensive), I wasn’t as bothered by it given the other racial turn of the film. On the other hand, there are so few roles for Asian actors in Hollywood films, it does seem a shame that they were taking by white and black actors.

After the film I spent some time online looking at plot explanations, list of characters, revelations, and comparisons to the novel. And I have the best of the links I found below. But to see film you merely need:

It isn’t a masterpiece. It probably deserved a second viewing that it won’t get. But it is a true original bold turn by three impressive filmmakers.

Rating (I was asked to include ratings): 4 out of 5