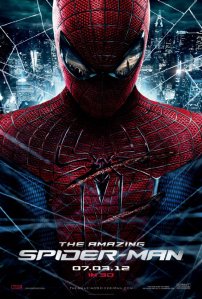 I have recently tried to upgrade myself – call it a mid-life crisis, Mark 2.0 (or 5.0?), a renovation, an adjustment, or whatever you wish – I left my job, moved to the other side of the country, and took a position that only lasts for 12 months. My life is full of changes – now we’ll see if I am full of transformation worthy of the remake.

This journey was on my mind as I saw The Amazing Spider-Man. It has only been 10 years since Sam Raimi’s superb big screen film on the web-slinger came out and 5 years since the painful 3rd installment. Perhaps a bit soon for a full-on remake. But the Hulk was remade after 5 years – albeit as a loosely related sequel rather than a complete remake. And we learned from The Incredible Hulk, adding an adjective – “Incredible,” “Amazing” – is not necessarily a sign of all the wonder that is to come.

The Amazing Spider-Man directed by Marc Webb, who made the wonderful (500) Days of Summer – has some amazing special effects. If you remember the original film in 2002, Spider-Man looked more like a ColecoVision game character. Now every shot is impressive. I liked the F/X much more than the original series.

But otherwise, I don’t think it matched let alone surpassed the original. While well put together and worth a summer visit to the multiplex with the giant screen, Spider-Man felt somewhat unnecessary. It reminded me of the weaker Superman Returns – a sequel/partial remake that did nothing to further the character’s world, but at least had the patience to wait almost 20 years after the previous movie. (Just look at that poster – it had no chance)

What Spider-Man lacks is more fun. The recent Avengers movie showed us how we can enjoy a summer super-hero blockbuster. (And if The Avengers had shut up about the Tesseract it would have been even better). Spider-Man has its exciting and entertaining moments – Peter’s discovery of his powers in the subway train, for example. But it has incredible slow spurts and, perhaps because it so familiar and ultimately not new, it lacks the wonder and joy that it needs to capture our love. Some of that is clearly a confused screenplay. There are numerous plot threads left unresolved or dangling. Why do we need unnecessary countdowns? Why does a high-tech lab have almost no security? What happened to Uncle Ben’s killer? (That’s not a spoiler – Ben’s death is not a surprise). One article online reviews each of the holes and theorizes further on them. It presumes you’ve seen the film, so don’t click unless you have: http://badassdigest.com/2012/07/05/was-the-untold-story-cut-from-the-amazing-spider-man/

So what have I learned for my re-Mark? 1st that I need strong writing. A defined vision and clear goals to make it successful. 2nd, fun. If I simply trudge through the journey, it won’t feel worth it and will be a chore. Remakes are tough to succeed. Few equal the original, let alone surpass it. Re-Marks are also tough. But know if you don’t get your remake quite right, there’s always redemption. Superman gets a reboot as Man of Steel on June 14, 2013.